The restoration of Williamsburg began with the Rev. Dr. W.A.R. Goodwin, rector of Bruton Parish Church, sharing his vision for Williamsburg with philanthropist John D. Rockefeller Jr. and his wife, Abby Aldrich Rockefeller, in 1924. What began as a modest initiative to preserve Williamsburg’s 18th-century buildings soon blossomed into a full-scale restoration of the former colonial capital. Now, almost a century later, The Colonial Williamsburg Foundation brings history to life for new generations through careful research, conservation and preservation and by providing immersive programming and authentic resources for learners, educators and researchers throughout the world. 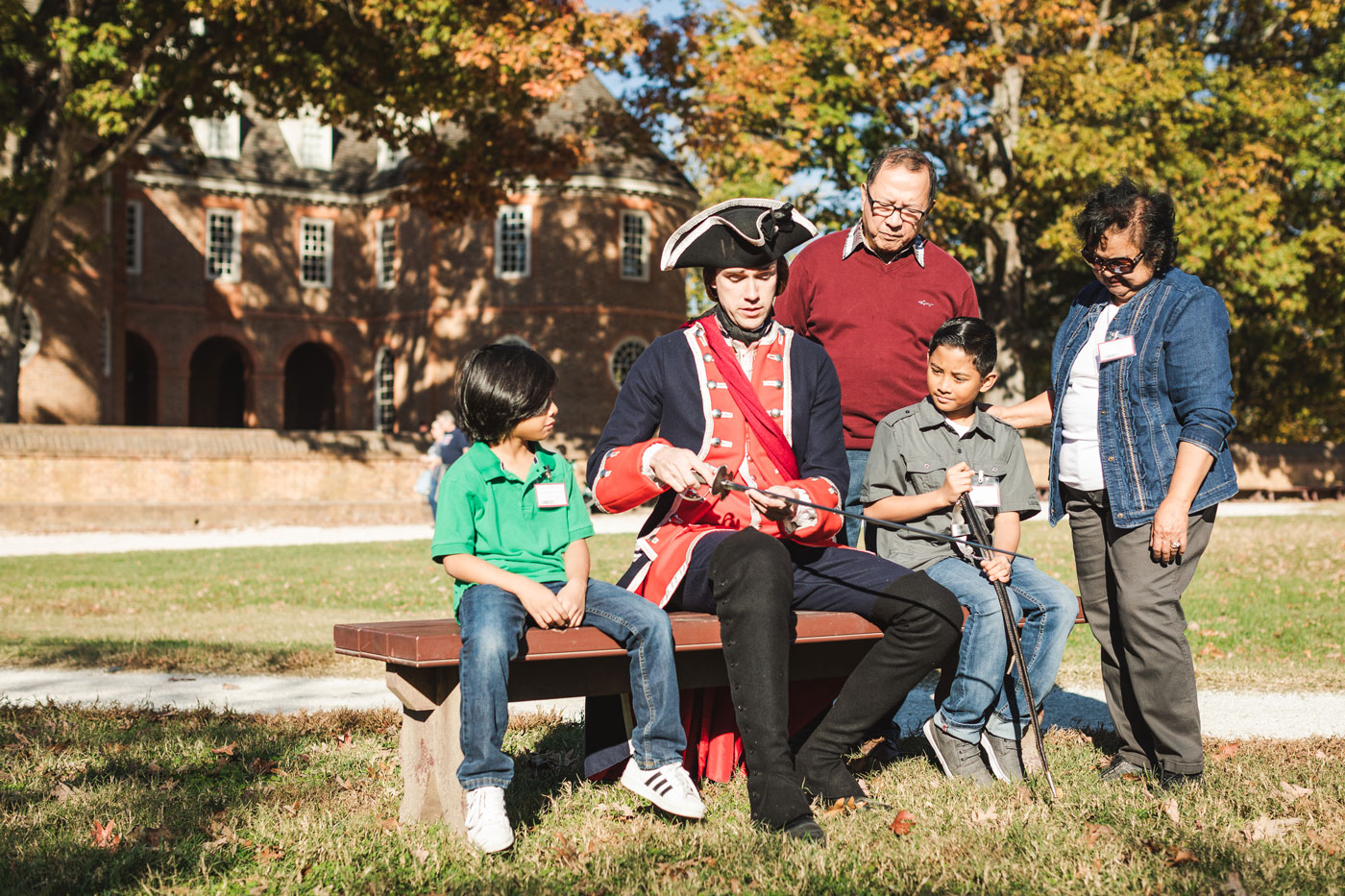 The Foundation also began interpreting colonial crafts during the 1930s. Cabinetmaking, blacksmithing and silversmithing were the first crafts to be introduced, followed by spinning and weaving, barbering and wigmaking, and candlemaking. Begun initially with modern methods, the Historic Trades team became world-renowned for its historical authenticity as the program matured and its craftspeople adopted the tools and methods of their counterparts in the late-1700s.

In the 1970s, costumed interpreters began conveying stories of 18th-century people in Colonial Williamsburg’s Historic Area. It was a way to depict people of all classes, genders and races, and at the time, was considered pathbreaking street theater.

The first-person interpretation that began on Historic Area streets evolved in 2005 with the introduction of the Nation Builders, a growing cast that includes interpretations of familiar founders like Thomas Jefferson and Patrick Henry alongside portrayals of lesser known residents and visitors to Williamsburg in the Revolutionary era. The history shared by the Foundation continues to expand with African American interpretation, which began in 1979, exploring the lives of enslaved and free Black Americans who made up more than 50 percent of Williamsburg’s population at the time of the Revolution.

Tribal delegations of American Indians were also a common sight in early Williamsburg. Trade, diplomacy and tensions were all a part of a journey of co-existence navigated by colonists and the American Indian tribes who lived on the land on which the English had settled. The American Indian Encampment in the Historic Area tells that story.

Today, programming across Colonial Williamsburg draws guests directly into the action. On any given day, visitors may engage in conversation with a diverse array of well-researched, costumed historic interpreters — from Revolutionary thought leader James Madison to the first-known ordained Black Baptist preacher Gowan Pamphlet; from Martha Washington, the first First Lady, to Oconostota, a Cherokee leader. Guests can ask questions and inspect the work products of dozens of expert artisans at our Historic Trades shops and sites. And at our theaters, people encounter unique perspectives on stage, where performers often involve their audiences directly in their art.

Research, conservation and historic preservation lie at the heart of Colonial Williamsburg’s mission to present the stories of America’s origins. Every day, these investigations of the past reveal new facts that facilitate our understanding of this nation’s beginnings.

The Art Museums of Colonial Williamsburg include two world-class museums under one roof — the Abby Aldrich Rockefeller Folk Art Museum and the DeWitt Wallace Decorative Arts Museum. The museums’ exhibitions draw on collections of more than 67,000 antiques and works of art, as well as 7,000 pieces of American folk art. An expansion completed in June 2020 added 65,000 square feet of space to the existing 100,000 square feet, offering more opportunities to showcase the Foundation’s extensive collection, as well as improved visitor amenities, including a new entrance, café and museum store.